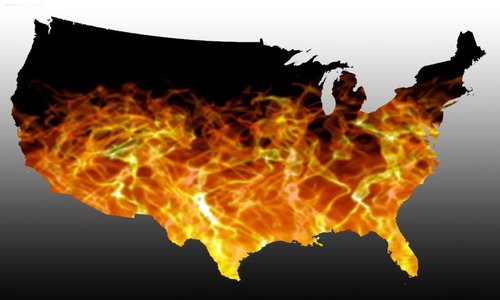 There is a belief among believers today that our generation is experiencing a rapid change very quickly. There is so much taking place that many followers of Christ are saying, “The Lord has to be coming soon.”

One of the areas of interest is the United States and its role in end-time events. The question is asked, “What role does America play according to Scripture?” Yet, when a person searches in Scripture for any mention of this country, it seems to be void. Many Bible scholars will agree with this conclusion as they study prophetic events.

Even so, what is interesting about one’s learning as it pertains to America is that there are still certain areas that draw one’s attention. They are distinctly described in God’s Word that an alert student will not miss as to their importance.

For instance, does God ever bring down a country in judgment? The answer is “Yes!” We see it in Scripture. In Job 12:23 it says that “He makes nations great, and destroys them; He enlarges nations, and guides them.” This is saying that God is sovereign over nations. The Lord can bless nations that obey Him but He can take them down that go against Him. No one can thwart it! He is the Almighty. “He removes kings and raises up kings” (Daniel 2:21). It cannot be any clearer as to God’s ultimate control. No one or country can come against Him. With the moral decline manifested in America, this may very well be leading toward the Lord’s judgment, if it has not already begun.

As far as this moral decline, it is moving downward fast and picking up steam. Along with a moral collapse comes a spiritual degeneration. With the Bible no longer in control as to peoples’ thinking, which it once was, this erosion will continue. People never go towards God; they always go away when left to their own sinful natures. The Bible says, “There is none who understands; There is none who seeks after God” (Romans 3:11). The “whatever is right for you,” has now become the standard of morality in this country. Evil is now called good and good evil (Isaiah 5:20).

Another place in Scripture where there is a major emphasis on morality is Romans 1:18-29. A strong warning in this text is that any nation that turns it back on God and rejects His truth will eventually experience God’s wrath. This country treats homosexuality, same sex marriage, transvestites as a common thing with no regard for reverence toward God and His standard of morality. Now these people lecture us on morality. Even churches are being threatened for preaching the sinfulness of these lifestyles. And, biblical conversion as a remedy may eventually be outlawed.

However, this is merely a part of the growing persecution against believers. As hatred for Jesus increases, persecution will follow (2 Tim. 3:12). It is beginning to happen!

There is, also, an emphasis today on dividing Israel. Thankfully, a block to this thinking has been placed by the current administration. But God warns distinctly of judgment if any nation turns its back on Israel (Genesis 12:3). Is America at this point?

As we focus on the events of the time, is the Lord’s return near for His redeemed? That is a big possibility! Therefore, we need to always being looking up (Titus 2:13).