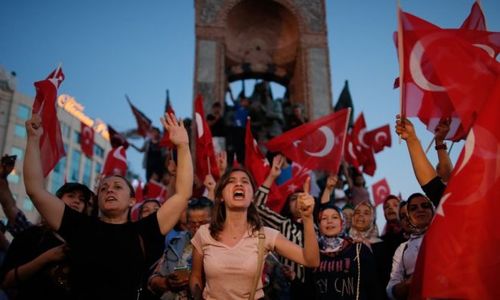 There is an alignment of nations forming today that was prophesied in Ezekiel 38 and 39 nearly 2,600 years ago. It is as though the final stage is being set for the coming of the Antichrist. Many of the pieces to Bible prophecy may be moving into place, at the present time, sooner than we realized or could have ever imagined.

One of the key players in this prophetic order is Turkey, a major piece in news today. The reason for this is its presence in the “Gog of the land of Magog” issue in Ezekiel 38. “Gog” is not a personal name but more likely a title such as Czar or Pharaoh (v. 2). “Meshech and Tubal,” in this verse, are linked to places known in ancient Greek and Assyrian inscriptions that place them in modern Turkey, although there may be overlap with some neighboring countries. The Ezekiel prophecy also speaks of “the prince of Rosh,” along with “Meshech and Tubal.” When Ezekiel wrote this prophecy, the Rosh people were those of the area north of the Black Sea, known today as “Russians.”

Therefore, what is interesting about Turkey is that it will join forces with Russia along with Persia (Iran), Ethiopia (Sudan) Libya and many more in attacking Israel (vv. 5-6). “Gomer” is most likely modern Turkey. Today, Sudan is controlled by or dominated by an Islamic Fundamentalist government. Turkey, on the other hand, is notorious in its funding of terrorists groups in the Middle East. Its whole purpose is to overthrow governments but also increase the power of the Muslim Brotherhood.

The Muslim Brotherhood is a Sunni Islamic organization that seeks to have all Muslim nations adhere to a strict Islamic Sharia law. Their desire is to see a caliph or sultan, a global Muslim leader, who presides over all religious and civic aspects of daily living.

However, Turkey is playing a big part in bringing all of this together and many are blinded to its purpose. It has played a crucial step in the “Palestinian Cause” that accuses Israel for “war crimes” against Palestinians and also “genocide.” Thus, Turkey’s goal is to gain strong Muslim support throughout the Middle East. This has caused, in turn, the Hamas to continue to dig tunnels into Israel in order to kill innocent Jews, especially woman and children.

Regarding Ezekiel 38 and 39, there has never been an invasion into Israel of such magnitude nor from Muslim nations. Since Islam did not exist in Ezekiel’s day, this attack is still future because it did not happen during the Bible days. Since the countries making up the coalition are Muslim, it will be basically an Islamic invasion led by “the prince of Rosh” as they join forces with him.

Even more, it will be fulfilled because Bible prophecy is from God and God is true to His Word. For instance, we see this taking place in Ezekiel 36 and 37 as they are literally being fulfilled in the regathering “from many peoples.” So, Ezekiel 38 and 39 are going to be literally fulfilled. And, the message is also clear that God is going to literally destroy Israel’s invaders. This will take place before the Tribulation and will open the door to the Antichrist. For those of us in Christ, we will be gone (1 Thess. 4:13-18).