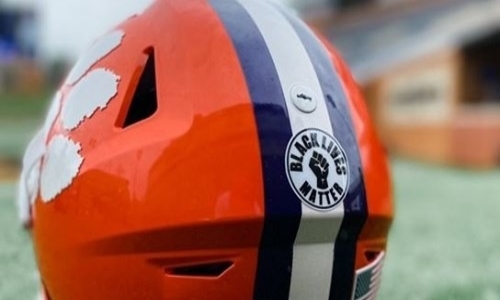 MADISON, Wisc., Sep. 14, 2020 /4 WINDS USA/ — Number 1 Clemson beat Wake Forest on Satuday with a score of 37 to 13. During the game, Clemson and Wake Forest had Black Lives Matter stickers on their helmets. They also have stickers that say “Equality” and “Love”.

Black Lives Matter is a terrorist organization that helped commit millions of dollars in damage to various cities by rioting and looting. Over 19 people were killed and 14,000 were arrested.

Black Lives Matter was formed by radical Marxists. They are against nuclear families and support the transgender movement. Also, there are reports that many leaders practice the occult.

Steve McConkey, 4 WINDS USA President, stands up worldwide for Christian athletes. In 2003, he was the only person publicly standing against the International Olympic Committee’s pro-transgender policies.

McConkey publicly denounced President Obama in 2016 for honoring the two 1968 Olympic protesters (John Carlos and Tommie Smith) at the White House while honoring the Olympic team. During the presentation, Obama raised his clenched fist in support of the protesters.

“There is a lack of discernment in the United States as sports is being used to promote leftist causes,” states McConkey. “The real problems are not being addressed, namely the lack of fathers and abortion in the black community. Christ is the answer to the problems.

“There are a few bad policeman, but the vast majority are doing a great job. The destructive protests are not about solving problems, but an effort to shift the United States to the extreme left. It is time to put pro-police stickers on helmets.”