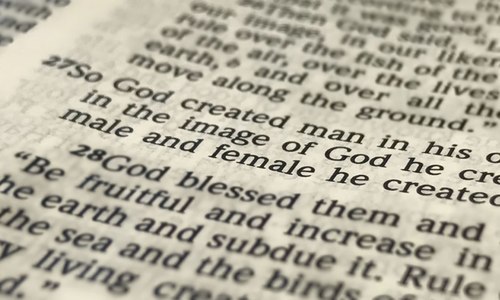 America is presently a divided nation with good and evil being on a collision course with each other. On one side are people concerned about the things of God and righteousness, even in politics and education, while on the other are those who hate Jesus, despise the Bible and anything to do with Biblical righteousness.

This is prevalent in many different areas of life. In the political realm the majority of the politicians were mute when one of them said, “Let us impeach that mother…….” Not a stir of pathetic reactions were given by her fellow constituents. A few years ago, such language would have brought dismissal or severe discipline, with no questioning or objection by either party. But the neutral reactions by our present day politicians sends a message to the American people that such profanity is acceptable by congressional leaders, especially if uttered by someone’s dislike for the present President.

Biblical values and morals that this country was built upon have gone amuck. Many people no longer consider any kind of God influence to be relevant. Laws are passed strictly by sinful reasoning. Tolerance is the name of the game even if it goes against a person’s Christian beliefs. Yet, the Islamic beliefs are kept in the limelight. Anyone that speaks against them in court will be reprimanded by those with little understanding of Islam and its future goal for America. If something offends Islam, action is taken to correct it even if this response jeopardizes the beliefs of non-Muslims.

Transgenders have unbelievable power. Their influence is seen in the sports and the government. This would not have happened a few decades ago. But now it is the common norm. It is a hard road for those in sports ministry who speak against it according to God’s Word. Personally, the emotional cost for them would be overwhelming if it was not for the Lord’s help (2 Cor. 12:9).

Another crucial area is the present apostasy occurring in Christendom. Paul warned the believers of Thessalonica that the day of Christ “will not come unless the falling away comes first” (2 Thess. 2:3). Paul is telling the church that they are not to be tricked into thinking that Christ had already returned. The “falling away” translates the Greek word “apostasia.” It is from this we get the word “apostasy.” This means to depart from something; and in this case, the Biblical standard of truth.

Paul warned young Timothy about future apostasy: “Now the Spirit expressly says that in the latter times some will depart from the faith, giving heed to deceiving spirits and doctrines of demons, speaking lies in hypocrisy, having their own conscience seared with a hot iron” (1 Timothy 4:1-2).

We are living in a day when many pulpits have departed from Biblical truth and are teaching self promotion. The message of repentance and salvation only in Jesus Christ is no longer preached (John 14:6). People are giving “heed to deceiving spirits” without realizing that this is merely leading up to the coming of the Antichrist. But, we who are born again (John 3:3) must fervently stand for truth and only attend a church that does!