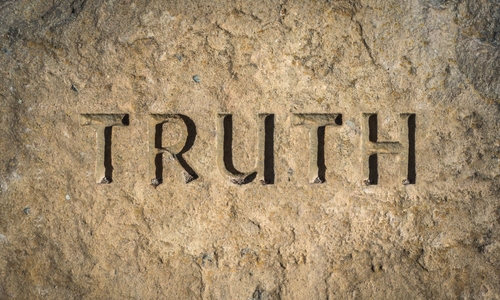 You may be familiar with the term, the big lie. It’s the name of a propaganda technique coined by Adolf Hitler. The big lie was that a lie told over and over again, and treated as true, would eventually be believed as truth. Hitler, in his hatred of the Jewish people, used the big lie to convince others that especially the Jewish people needed to be exterminated for what they hadn’t done, resulting in the barbaric Holocaust.

Is the big lie in some form or another still around in our culture today? We watch what is happening to information in the political arena today, where a lie, such as the Russian collusion, was promoted and then spun through the media as truth. Then, in science, the evolutionary theory is promoted as fact, which it isn’t, yet we are led to believe it is. In public education man’s reason reigns supreme as the last word, but man’s reason is here today and gone tomorrow.

And what does the biggest liar promote? Obviously, the biggest lie. And what’s that? Satan’s biggest lie to Adam and Eve, in the true historical account, was that, if they believed him and followed his directions, they would be like “God.” That meant they would be “God,” replacing their Creator and have full liberty to do whatever they wanted, for God was limiting their behavior in His direction to them.

Believing the biggest liar promoting the biggest lie didn’t turn out as the biggest liar said. Adam and Eve didn’t become like “God,” rather because of their disobedience, they hid from God when He came calling for them, practiced the blame game, actually lying about what they did. God provided His forgiveness for them through the animal sacrifice, looking forward to Christ’s complete sacrifice, but they lost living in beautiful Eden, the garden of delight.

Is this biggest lie still around today? Certainly, because, sadly, individuals still live their lives thinking they are “God.” Question. Are you living that way? The old nature we have all inherited from Adam, wants to be “God,” and do its own thing based upon its reason, resulting in all kinds of behavior that promotes man’s own selfishness, deception, and immorality. Read Mark 7:21-23.

And when a person thinks that he is “God” then he becomes the final authority in what he thinks, says, and does. When he thinks he is the final authority, he may seek to control other people. A case in point is how individuals in high tech prohibited certain information from getting to the public, which information could have affected a person’s vote in the US election. Government can do this as well, by trying to convince people to think a certain way regarding issues. Such can even happen in personal and family relationships, as well as in the work-a-day world.

This controlling attitude is the antichrist spirit which desires to take away the biblical God’s freedom for individuals to enjoy life, liberty, and the pursuit of happiness. As we get closer to the revelation of the actual antichrist, we may see an expansion of this controlling spirit to influence our lives.

What’s the answer to individuals acting as “God” and playing “God” taking away people’s freedom? The one of true truth needs to be encountered – Jesus Christ – who said that He was the Way, the Truth and the Life. Experiencing Him through faith, the believer, discovers who he is, infinitely valuable, made in the image of God, and now he has the freedom to be what God has intended him to be – one who enjoys God through His word, while doing God’s will personally, in his family, and in serving and respecting others. Knowing personally, the truth, Jesus Christ, the believer knows that the biggest lie has been replaced with the biggest truth – he is alive in Christ for time and eternity.