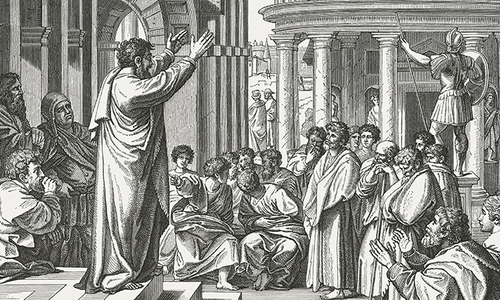 “When the righteous increase, the people rejoice, but when the wicked rule, the people groan” (Proverbs 29:2).

Christians need to stand up as they preach the gospel. Here are examples:

Samuel confronted King Saul for not carrying out the commands of God as Saul was rejected as king (1 Samuel 15).

Jeremiah rebuked the king for his unjust rules, oppressing the stranger, orphans, and widows (Jeremiah 22).

Jesus pronounced many woes upon the Scribes, Pharisees, and Sadducees throughout the four gospels. They had members in the Sanhedrin, a tribunal of the Jews headed by a High Priest that had religious, civil, and criminal jurisdiction. (Matthew 23:13).

Jesus pointed out the guilt of those who delivered Him to Pilate, but He still held Pilate responsible for his judgment (John 19:11).

Arrested in Jerusalem and moved to Caesarea by troops, Paul defended himself before Felix, who governed Judea. Paul was being accused of sedition, rebelling against authority, because of his teaching on the resurrection of Jesus Christ (Acts 24).

In Acts 25, Festus took up Paul’s case in Caesarea as he replaced Felix. Festus wanted to do the Jews a favor by having the trial moved to Jerusalem. However, the Jews were plotting an assassination.

Anticipating these plots, Paul invokes his right as a Roman citizen before Festus and appeals to Caesar (Acts 25:11). Using the law to keep preaching the gospel, he eventually went to Rome to stand trial. As he went through the court system from the beginning, he was able to share with government leaders and others.

Before going to Rome, Paul also appeared before King Agrippa. He preached to King Agrippa and those present. “And Agrippa said to Paul, ‘In a short time would you persuade me to be a Christian?'” (Acts 26:28). King Agrippa ruled that Paul was innocent, but since he appealed to Caesar, he had to go to Rome for trial to face Nero.

In Rome, Paul gives an account of his days (Acts 28:17-24). He conversed with many and contended for the faith for two years under house arrest. “And some were convinced by what he said, but others disbelieved” (Acts 28:24). By using Roman law, Paul was able to further his outreach before Nero put him to death.

Religious leaders (many were part of the government) and government leaders continually arrested the apostles throughout the New Testament. Example, Paul and Silas were imprisoned after casting a demon out of a slave girl that used divination for profit (Acts 16).

Her masters had them arrested as the profits from divination dried up. Biblical morals always leads to friction with government officials, especially when finances are involved.

Demetrius, a silversmith who made idols, accused Paul of causing harm to the idol business because Paul opposed idols. As a result, a great riot occurred in Ephesus (Acts 19). Because of Rome’s Pax Romana, a law allowing Rome to squelch riots, the riot subsided so Paul was allowed to leave Ephesus.

Jesus died on the cross for our sins. Eleven of the twelve apostles were martyred. They preached the truth and the holiness of Christ. The Roman culture during that time was morally bankrupt.

The holy lives of Jesus and the apostles, alongside their Biblical message, convicted the ungodly resulting in greater persecution.

In the future, Jesus will establish His millennial kingdom after defeating all human governments (Revelation 19).

The tension exists between sharing the gospel (preparing people for eternity) and standing up in this world (making it a better place for our children and grandchildren). Bottom line, we are to do both as the Lord leads, not erasing either one.