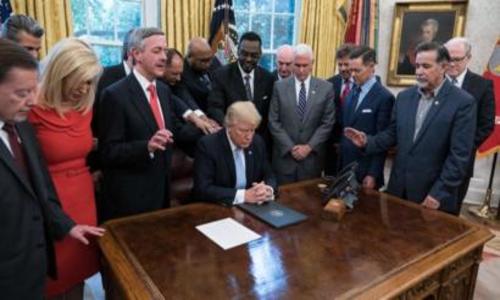 (WASHINGTON TIMES) On Dec. 14, 2019, Christianity Today published an editorial whereby, then-editor in chief Mark Galli called for the immediate removal of Donald Trump as president of the United States. “Mr. Trump,” declared Mr. Galli, “is a near-perfect example of a human being who is morally lost and confused.”

Mr. Galli then went on to declare that none of the president’s positive contributions outweigh the “moral and political danger” America now faces under his leadership.

He concluded: “We call for the many evangelicals who support the President to remember who you are and whom you serve. Consider how your justification of Trump influences your witness.”

On Tuesday, Jan. 21, 2020, Scott McKnight, writing for the same magazine, doubled down on the “smarter-than-thou” condemnation of Mr. Trump’s defenders.

“We feel compelled to say that the alliance of American evangelicalism with this presidency has wrought enormous damage to the Christian witness … Wholesale evangelical support for the administration has made toxic the reputation of the Bride of Christ … [Trump] is a symptom of a sickness … With profound love and respect, we ask our brothers and sisters in Christ to consider whether they have given to Caesar what belongs only to God: their unconditional loyalty.”

Mr. McKnight then finishes drawing his caricature: “[The conservative] solution … is the state. [Their] narrative today is statism; the theory that the state ought to rule, and the state can solve our problems … [M]ake no mistake, [their] story is increasingly [one of statism] … It is a belief that solutions to our biggest problems are found in the state, and the Christian’s responsibility … is to get involved and acquire political power … Statism makes the government a god. Statism … goes back to the time of Constantine.” (READ MORE)