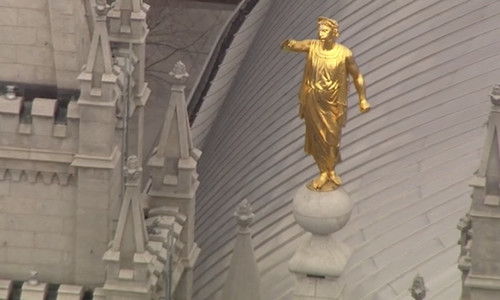 (REUTERS) The most powerful earthquake to hit Utah in 28 years shut down Salt Lake City’s airport, knocked out a coronavirus hotline and forced the evacuation of a refinery on Wednesday, officials said.

There were no immediate reports of deaths or injuries.

The 5.7-magnitude, early morning tremor centered in north-central Utah was the strongest the state has experienced since 1992, when a 5.9-magnitude quake rattled the St. George area in Utah’s southwestern corner, according to Utah Emergency Management.

The quake damaged the Angel Moroni statue atop Salt Lake Temple, the Mormon Church’s largest, knocking a trumpet from the angel’s hand. A church spokesman also said some of the temple’s smaller spire stones were displaced, according to the Deseret News.

Utah has a large Mormon population and holds a special place in the Church of Jesus Christ of Latter-Day Saints. READ MORE