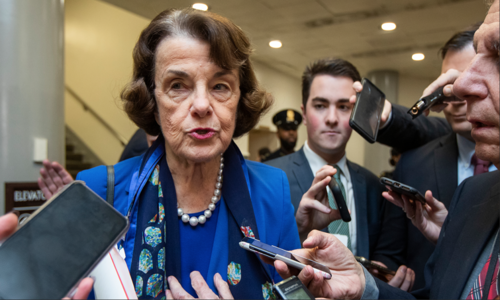 (FOX) Sen. Dianne Feinstein of California and three of her Senate colleagues reported selling off stocks worth millions of dollars in the days before the coronavirus outbreak crashed the market, according to reports.

The data is listed on a U.S. Senate website containing financial disclosures from Senate members.

Feinstein, who serves as ranking member of the Senate Judiciary Committee, and her husband sold between $1.5 million and $6 million in stock in California biotech company Allogene Therapeutics, between Jan. 31 and Feb. 18, The New York Times reported.

Feinstein defended herself in a series of tweets on Friday, saying she has “no control” over her assets and the stocks in question were her husband’s transactions.

“During my Senate career I’ve held all assets in a blind trust of which I have no control. Reports that I sold any assets are incorrect, as are reports that I was at a January 24 briefing on coronavirus, which I was unable to attend,” she tweeted.

Reports identified the three other senators as Richard Burr of North Carolina, Kelly Loeffler of Georgia and James Inhofe of Oklahoma, all Republicans.

Burr, chairman of the Senate Intelligence Committee, used more than 30 transactions to dump between $628,000 and $1.72 million on Feb. 13, according to ProPublica. READ MORE