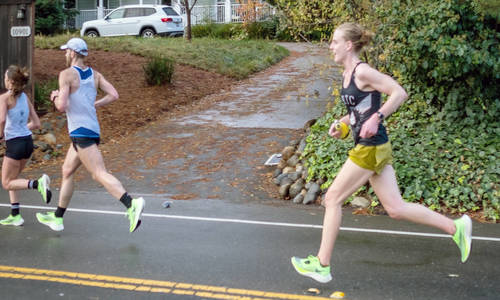 MADISON, Wis., Feb. 14, 2020 /4 WINDS USA/ –Transgender athlete Megan Youngren has qualified for the 2020 Olympic Marathon Trials to be held February 29 in Atlanta. The race will determine who will represent the USA at the Tokyo Olympics.

Youngren will be the first transgender athlete to compete in the marathon trials.

“I’m open to talking about it to people because that’s the only way you make progress on stuff like this,” says Youngren.

Youngren started taking hormone medication in 2011 while in college. In 2012, Youngren came out as transgender.

“This is a historical event that should have never happened,” states McConkey. “In 2003, the Olympic Committee did not listen to our warnings. Though Youngren is not a favorite to make the Olympic team, this is a step in the wrong direction.

“What happens when a 6-10 male basketball player decides to compete as a woman? After the Tokyo Olympics, the Olympic Committee is expected to take a tougher position against transgenders. We believe they should be eliminated from female competition altogether.”

In 2003, McConkey started fighting against the International Olympic Committee for allowing transgenders in the Olympics. He was the only one who stood against this publicly.

From there, the transgender movement spread to state high schools, the NCAA, NFL, NBA, MLB, and the military. Steve has fought this LGBT agenda every step of the way.

McConkey tried to sue the International Olympic Committee before the 2016 Olympics in Rio. He was concerned that intersex athletes would sweep the 800 meters. That is exactly what happened.

McConkey was told he did not have a case because he did not have a vested interest in the race. After the race, World Athletics for track and field started the process of lowering transgender testosterone levels.

4 WINDS USA, founded in 1988, stands up worldwide for Christian athletes. Starting in world-class track and field ministries in 1981, Steve and Liz McConkey have worked through nine Olympics. From 1982 to 1992, McConkey was a USA National Track and Field Club Coach. After 1992, they began to work with world-class track and field athletes on all teams. In 2013, McConkey started standing up worldwide for Christian athletes in all sports. Website is 4WindsUSA.com.

McConkey graduated with honors from Western Kentucky University (Master of Public Health), Minnesota State University, Mankato (BS-Community Health), and Webster High School (WI). They have lived in Eugene, Dallas-Fort Worth, Minneapolis-St. Paul, and now Madison, Wisconsin. McConkey was born in Des Moines, Iowa before moving to NW Wisconsin after the sixth grade. He has ran over 67,500 miles and advises distance runners.