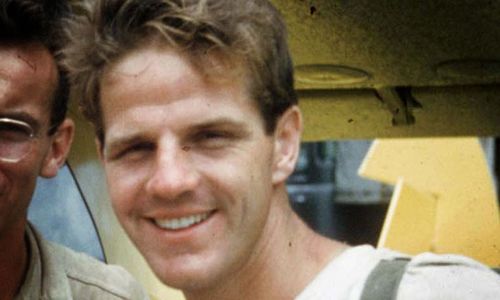 Jim Elliot along with Nate Saint, Ed McCully, Peter Fleming, and Roger Youderian had committed their lives to the Lord Jesus Christ to take His gospel to the unreached Auca Indians, more properly referred to as the Huaorani, in Ecuador.

On January 8, 1956, the five men were martyred, leaving behind their wives and families. Certainly, their deaths were tragic, but in the light of these deaths and God’s providence, many were drawn to and called to missions. Even though we don’t understand the workings of God many times, God used the death of these dedicated men to advance His kingdom eventually to the Auca Indians and to encourage all believers around the world. Like Jesus, His gospel was advanced through death, bringing life to those who would believe in Him.

At the time of their tragic deaths, there was much discussion even criticism of what the men did. And from a purely human viewpoint, such a venture was useless and ridiculous, for here were five men full of vigor and vision with great potential having their lives snuffed out for the cause of the gospel of Christ, leaving their wives and children. It’s easy to add. What a waste! How foolish!

But Jim Elliot made this famous statement in his life, which diametrically opposed any humanistic thinking:

Such a statement described so vividly the heart of these five men.

To them, it was foolish to reject the biblical God and His forgiveness of sin and eternal life provided in Jesus Christ. To them it was foolish to live for the world and follow its sirens rather than accepting Christ and serving Him with enthusiasm, even if it meant giving their lives in following Him to make the Lord’s gospel known. What happened to them was not the issue. They knew whether they lived or died they belonged to the Lord – for heaven was their ultimate home, and the Lord their eternal reward.

How about you? What’s your commitment to Jesus Christ at the beginning of this New Year? I trust that it’s not rejection of Him, which is being foolish (Psalm 14). Or, if you know the Lord personally, perhaps you are living a life of low commitment, which is really living a foolish life as well.

Such is experienced as the believer takes up Christ’s cross daily in 2018 (Luke 9:23-28), saying “NO” to selfishness and “YES” to the Lord’s selflessness and righteousness in His power, while serving Him with gladness and enthusiasm. That’s not foolishness, but a living demonstration of the power of the biblical God in action!