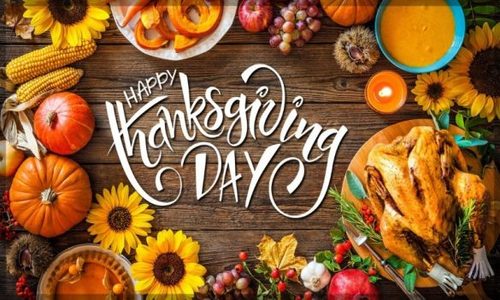 Thanksgiving Day had its origin in November 1621.

After the Pilgrims’ first corn harvest proved successful, Governor William Bradford organized a celebratory feast and invited a group of the fledgling colony’s Native Americans, including the Wampanoag chief Massasoit. Now remembered as American’s “first Thanksgiving”—although the Pilgrims themselves may not have used the term at the time—the festival lasted for three days.

A brief description of that “first Thanksgiving” comes from Pilgrim chronicler Edward Winslow, who wrote about fowl, and 5 deer they had for their meal (They also probably had fruits and vegetables). His concluding words were, “And although it be not always so plentiful, as it was at this time with us, yet by the goodness of God, we are so far from want, that we often wish you partakers of our plenty.”

History also tells us that the Pilgrims held their second Thanksgiving celebration in 1623 to mark the end of a long drought that had threatened the year’s harvest. This prompted Governor Bradford to call for a religious fast. Days of fasting and thanksgiving on an annual or occasional basis became common practice in other New England settlements as well.

For more than two centuries, days of thanksgiving were celebrated by individual colonies and states. It wasn’t until 1863, in the midst of the Civil War, that President Abraham Lincoln proclaimed a national Thanksgiving Day to be held each final Thursday in November. In 1939, President Franklin Roosevelt briefly moved Thanksgiving up a week, in an effort to extend the already important shopping period before Christmas and spur economic activity during the Great Depression. Facing opposition, He moved Thanksgiving Day back to the fourth Thursday of November.

Thankfully, the tradition of Thanksgiving Day lives on. It can just be celebrating “Turkey Day,” which means it’s just a time to get together with family and friends, having a delicious meal, and perhaps watching football.

What a privilege for believers in Christ, all year through, and especially on Thanksgiving Day, to be able to give thanks to one’s Heavenly Father from whom all blessings flow (Psalm 107:31). The song writer penned these words to encourage believers to give thanks to their Lord even amidst life’s challenges, “Count your many blessings, name them one by one, and it will surprise you what the Lord has done.