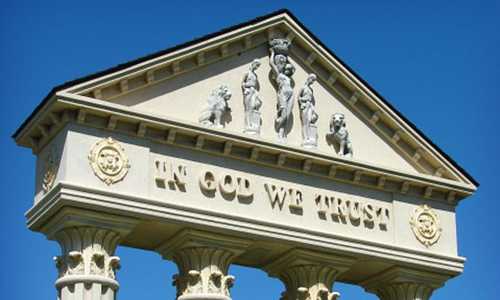 (ABC) Conservative Republicans are pushing for a law requiring government buildings and schools across Kansas to post the national motto of “In God We Trust,” an idea critics say is part of a broader effort by the Christian right to promote their religious beliefs in public life.

A Kansas House committee heard testimony Thursday on a bill sponsored by 13 GOP lawmakers that would, among other things, require all public school classrooms and libraries to post the motto. Under the measure, the motto must be posted as soon as schools, colleges, cities and counties receive donations, either of “durable” posters or money to cover the costs.

It drew immediate opposition from Democrats, and even one conservative Republican expressed concern about the bill’s scope. The national American Atheists organization said such a law would stigmatize nonbelievers and religious minorities and represent a step toward harsher anti-LGBTQ and anti-abortion measures. The bill mirrors model legislation promoted by some conservative Christian groups.

The hearing Thursday tapped briefly into longstanding tensions between people who want to keep government from promoting religious beliefs and those who argue that faith’s role in public life has been narrowed too much. American churches also are wrestling with a rise in the number of Americans with no religious affiliation. READ MORE