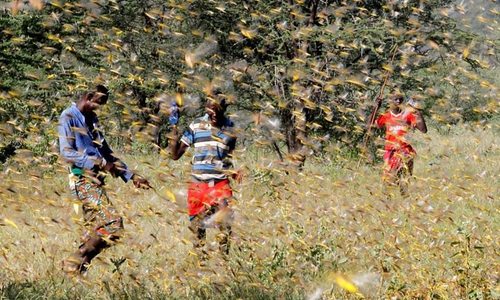 (ACCU WEATHER) Unusually heavy rain is being cited as a factor in one of the worst outbreaks of desert locusts in decades across parts of East Africa and posing what officials say is an “unprecedented” threat to crops in third world countries, according to a recent report issued by the Food and Agricultural Organization of the United Nations (FAO).

The rare outbreak is destroying crops and pastures across eastern Ethiopia and neighboring areas of Somalia, parts of Sudan, Eritrea and northern Kenya as it risks spreading further due to the continuation of favorable ecological conditions for locust breeding until around June.

The report states that South Sudan and Uganda are not currently affected, but they are at risk for the species to eventually arrive.

“This has become a situation of international dimensions that threatens the food security of the entire subregion. FAO is activating fast-track mechanisms that will allow us to move swiftly to support governments in mounting a collective campaign to deal with this crisis,” FAO Director-General QU Dongyu said in a statement earlier this week.

Dongyu said control efforts are underway, but due to the scale and urgency of the threat, additional financial backing is needed from international donors to help authorities. (READ MORE)