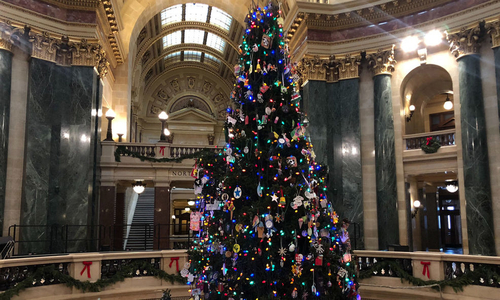 A new petition is circulating to get the Holiday Tree put up inside the Wisconsin State Capitol. The man who started it is hoping to change Governor Evers’ mind, after the announcement that there will be no tree this year.

In a letter to state educators and students, Governor Evers said “the State Capitol remains closed due to the ongoing pandemic and our efforts to keep Wisconsinites and visitors safe.”

The news upset Wisconsin native, Timothy Johnson. “I just grew up in a large family and I love Christmas, it’s easily my favorite holiday,” says Johnson.

Johnson started an online petition in an effort to get the tree put up this year. “When I see all these things and major events getting cancelled, all the traditions and stuff, it just kind of frankly it just irritates me that they’re so quick to cancel things these days rather than come up with an alternative,” says Johnson.

Officials with the Freedom From Religion Foundation say they agree with the Governor’s decision to nix the tree display this year. Co-President and Co-Founder, Annie Laurie Gaylor says FFRF has decided not to put up their displays this year either.

“We won’t be putting up our equal time displays this year. We have a winter solstice sign that we’ve been putting in the capitol I can’t even remember how many years. And also what we call a bill of rights nativity. That celebrates the anniversary of the adoption of the Bill of Rights on December 15th. And that means all the other displays that are there to counter our display and so on won’t be there either. And I that’s fine,” says Gaylor. READ MORE AT NBC