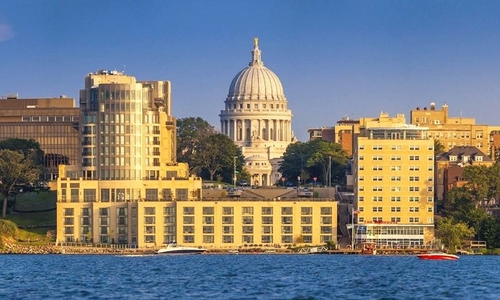 (APG) The outdoor plaza overlooking Lake Mendota at The Edgewater hotel would have been a sea of cardinal and white this Friday.

A few blocks away, at the Concourse Hotel, each of its 373 rooms would be booked. Restaurants and retailers on nearby State Street would be jammed and there would be anticipation by hotel guests of a Saturday morning counterclockwise stroll around Capitol Square at the Dane County Farmers Market.

At the corner of Regent and Monroe streets, HotelRed would be sold out with some guests taking in the festive scene from their balconies. Lines for Mickies Dairy Bar would stretch down the block to Oakland Avenue, beer gardens on Regent Street would be packed and the UW Marching Band would be firing up a crowd at Union South.

Except in this year of COVID-19, Madison and the dozens of hotels throughout Dane County will be eerily quiet when the Wisconsin Badgers football team opens its delayed and shortened season against the University of Illinois without 80,000 fans crowding into Camp Randall Stadium.

As a whole, intercollegiate athletics at UW-Madison produce an annual economic impact of $610 million for the state, including $395 million in Madison, according to a study completed last year. Each Badgers home football game contributes $16 million to the state’s economy, but the vast majority of that money won’t materialize this season due to a lack of fans.
Hotel operators in Madison say business is down anywhere from 60% to 80% compared to 2019 and many are already bracing for a difficult 2021 as the virus continues to surge. It’s unclear how many properties around the state will survive past the distribution of a vaccine if federal aid, which continues to be debated in Washington, D.C., isn’t realized.

A survey conducted last month by the Wisconsin Hotel & Lodging Association showed 47% of lodging facilities in the state could close within a year without loans or grants. More than 50% of the state’s 200,000 lodging property employees remain furloughed or laid off. READ MORE