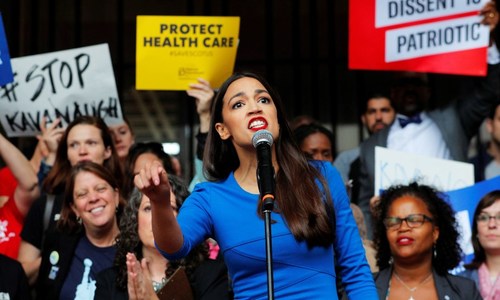 (BREITBART) Representative Alexandria Ocasio-Cortez (D-NY) said Wednesday on ABC’s “The View” that she didn’t believe that billionaires should exist.

Ocasio-Cortez said, “Yes, I do. I also think that the power of his money is not disconnected from his stances on stop and frisk because when you have that much money, and you purchase elections, you no longer have that sense of accountability to the people who voted for you.”

She added, “And here’s the thing is that If the amount of money that you have can force the DNC to change their rules, but the DNC would not change their rules for Cory Booker, Julian Castro, Kamala Harris, that is an actualization of power.”

She concluded, “And we all know how I feel about billionaires. I don’t think that in a place where 60 percent of Americans can’t even, you know, make more than $40,000 a year that the presence of a billionaire who largely makes their money off of businesses underpaying their workers like Walmart, like Amazon, like so on, should exist.” READ MORE