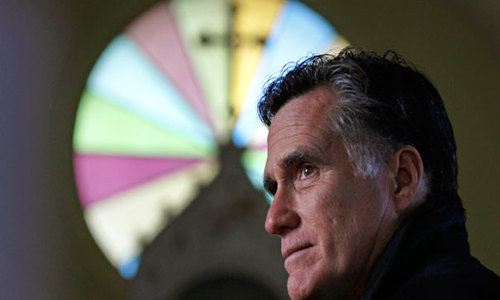 (WASHINGTON POST) As Sen. Mitt Romney (R-Utah) delivered a history-making speech on the Senate floor on Wednesday afternoon, becoming the first U.S. senator to ever vote to remove from office a president of his own party, Romney did not express his greatest emotion when he called the actions of President Trump “grievously wrong.”

He was most emotional when he talked about God.

“As a senator-juror, I swore an oath before God to exercise impartial justice. I am profoundly religious. My faith is at the heart of who I am,” Romney said at the start of his speech. Clearly moved, he paused for several long moments and took a breath before continuing, “I take an oath before God as enormously consequential.”

Romney is a member of the Church of Jesus Christ of Latter-day Saints, the denomination colloquially known as Mormonism. As he explained his vote, he turned to Mormon tradition.

On Fox News, anchor Chris Wallace said to Romney, “Donald Trump will never forgive you for this.” Romney’s response: “Do what is right. Let the consequence follow.”

Those words come from a hymn that is used in the Mormon Church. Written by an anonymous author in 1857, “Do what is right” exhorts worshipers, “Angels above us are silent notes taking of ev’ry action; then do what is right!”

He told the Atlantic he had his father’s favorite verse from Mormon scripture in mind throughout the deliberative trial process: “Search diligently, pray always, and be believing, and all things shall work together for your good.”

Mormons are traditionally a conservative-leaning group but have been wary of Trump throughout his presidency. While 80 percent of Mormons voted for George W. Bush in 2004, and 78 percent voted for Romney when he ran against Barack Obama in 2012, just 61 percent voted for Trump in 2016. READ MORE