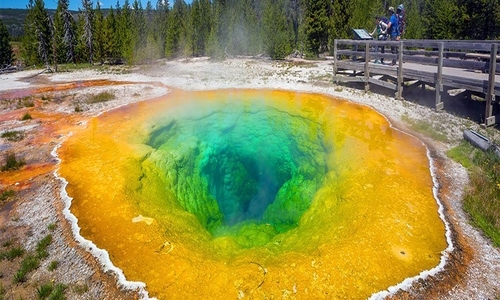 (IDAHO STATESMAN) A swarm of 91 earthquakes rattled the Yellowstone National Park region in just 24 hours on Thursday, according to the United States Geological Survey. The quakes trembled southwest of Yellowstone Lake between Heart Lake and West Thumb.

Although the area is one of the most seismically active regions in the U.S., the cluster of quakes “is on the large side in terms of number and magnitude, but nowhere near the largest,” Michael Poland, scientist-in-charge at the Yellowstone Volcano Observatory, told McClatchy News in an email.

“Yellowstone has had swarms that include many hundreds of earthquakes in a day,” Poland said. “For example, there was a 3-month-long swarm that occurred in June-September 2017 with 2,400 located earthquakes and maximum [magnitude] 4.4.”

The recent cluster of quakes didn’t pass 3.0 magnitude. The biggest temblor was recorded at 2.8 magnitude, while the weakest was measured at 0.1 magnitude. It’s when earthquakes reach magnitudes between 2.5 and 5.4 that activity is usually felt, with minor resulting damage.