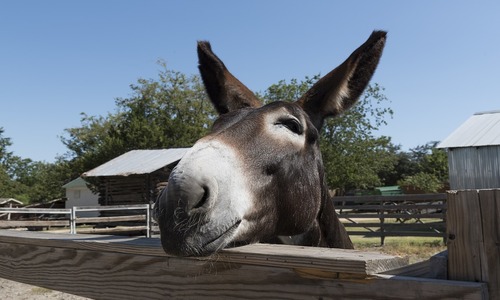 One day a farmer’s donkey fell down into a well. The animal cried piteously for hours as the farmer tried to figure out what to do.

Finally, he decided the animal was old, and the well needed to be covered up anyway; it just wasn’t worth it to retrieve the donkey.

He invited all his neighbors to come over and help him. They all grabbed a shovel and began to shovel dirt into the well. At first, the donkey realized what was happening and cried horribly. Then, to everyone’s amazement he quieted down.

A few shovel loads later, the farmer finally looked down the well. He was astonished at what he saw. With each shovel of dirt that hit his back, the donkey was doing something amazing. He would shake it off and take a step up.

As the farmer’s neighbors continued to shovel dirt on top of the animal, he would shake it off and take a step up. Pretty soon, everyone was amazed as the donkey stepped up over the edge of the well and happily trotted off!

That’s why the Bible has a great word for the follower of Christ at the beginning of the New Year. I trust you know Him as your personal Savior (John 3:16), for the Bible teaches that all things work together for good to those who love God, to those who are called according to His purpose (Romans 8:28). Believers, then, in Jesus Christ know that God is always for them (Romans 8:31), and is giving the strength to keep going in the midst of life’s challenges (Philippians 4:13), realizing that they will make a person more mature in Christ, while through those challenges God will be glorified in one’s life (cf. Romans 5:1-5).

This means that the believer in Christ discovers that, depending on the Lord’s power, one can begin to deal with the “dirt” that may affect him or her in life’s many challenges.

• Pure thoughts can replace impure thoughts (II Corinthians 10:4).
• Forgiveness frees one’s life of hatred (Ephesians 4:32).
• Through prayer one is relieved of worry (Philippians 4:6-7).
• Life can be lived simply with thankfulness for what one has (I Timothy 6:10-12).
• The believer has eternal purpose in the challenges of life as one lives in a world that is searching for that purpose (I Corinthians 10:31).
• There is blessing in giving not receiving (Acts 20:35).
• One has a biblical world view as he or she is challenged to think otherwise (I John 3:1-3)

Never give up! “SHAKE IT OFF AND STEP UP” in Christ’s strength. You will be amazed at what He will do in and through you in 2019.