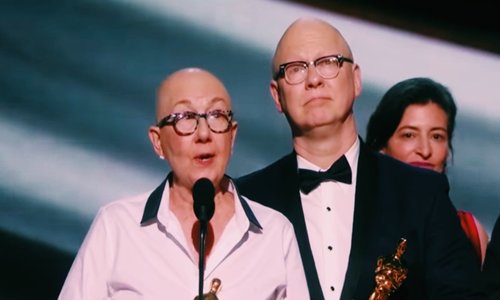 “Our film is from Ohio and China, but it really could be from anywhere that people put on a uniform, punch a clock, trying to make a better life,” Reichert said after winning the award. “We believe things will get better when workers of the world unite.”

“Workers of the world unite” is a well-known line from “The Communist Manifesto” by Friedrich Engels and Karl Marx. Translated “Proletarier aller Länder vereinigt Euch!” in German, it means “Proletarians of all countries, unite!” but became common in English as “Workers of the world, unite! You have nothing to lose but your chains!”

The Hollywood Reporter described the Netflix documentary as a chronicle of “the abandoned General Motors car plant restored by a Chinese billionaire, Cao Dewang, as a post-industrial Ohio windshield factory, Fuyao Glass America. The film captures the optimism of Dayton residents about their future, then chronicled them enduring increasing demands by Chinese management for elusive profits.” READ MORE