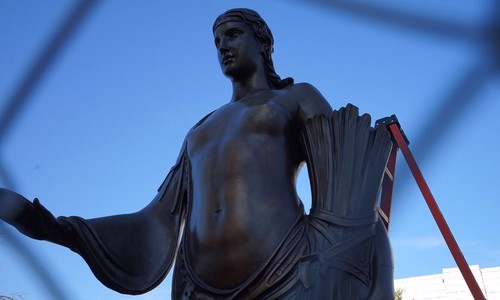 (ST. LOUIS PUBLIC RADIO) Ceres, the Roman goddess of agriculture, returned to Jefferson City on Friday. The 1,400-pound statue normally sits atop the Capitol dome but was taken down for restoration for the first time in almost 100 years.

“Hopefully the public will get to see a part of history here,” said Gov. Mike Parson at the public unveiling of the statue.

Bob Priddy, past president of the State Historical Society of Missouri, said this will likely be the only time visitors will see the statue up close before it’s hoisted 240 feet in the air.

“She came down for the first time since she went up there in 1924, so only once every 94, 95 years does this goddess come to earth again,” Priddy said. “Who knows how long she’ll be up there once they put her up there again in a few days.”

The bronze and copper statue stands 10 feet, 6 inches tall. It was removed from the capitol dome in November 2018.

Ceres was constructed in three pieces back in 1924 when there was no such thing as the 500-ton crane that’s being used today. Priddy said men tied ropes to a large elm tree on the Capitol lawn and a winch was placed on the top of the dome.

“The winched her up there in three pieces, and then they welded her together up there,” he said. READ MORE