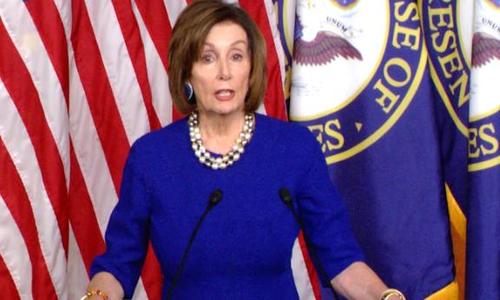 The House speaker spoke Thursday morning in Washington, D.C., at the National Prayer Breakfast where she prayed for those who are persecuted because of their religion. She listed people of Buddhist, Muslim, and Jewish faiths before generalizing about other persecuted religions.

“Oh, Lord, we thank all gathered at this prayer breakfast for lifting our voices for the poor and the persecuted, the millions who are missing or murdered because of their faith,” Pelosi, who is a Catholic, prayed.

“Let us pray for the Panchen Lama and all the Tibetan Buddhists imprisoned in China or missing for following their faith,” she said. Pelosi also prayed for the “1 to 3 million Uighurs in China forced from their homes and incarcerated in camps” and for “Raif Badawi in Saudi Arabia and for all the writers and religious free thinkers imprisoned for speaking their minds.”

The House speaker also prayed for “priests, rabbis, pastors, and religious leaders around the world whose freedoms have been stolen because of what they believe,” for victims of anti-Semitism, and for the “countless Muslims and other religious minorities, often unseen and unnamed, who have been abducted, oppressed, and abused because of who they are and what they believe, their faith.” READ MORE