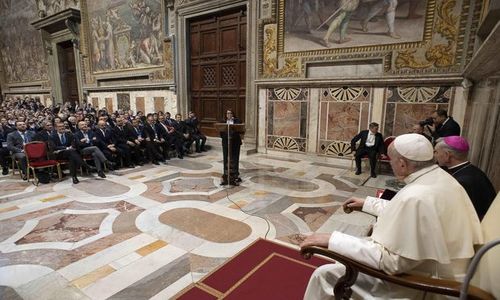 Asked by a Spanish journalist via Skype whether the COVID-19 pandemic is nature’s way of taking “revenge” on humanity, the pontiff suggested that nature is calling for attention.

“There’s a saying, which you have heard: ‘God always forgives. We sometimes forgive. Nature never forgives,’” the pope said. “Fires, earthquakes … nature is throwing a tantrum so that we will take care of her.”

The pope was also asked whether he is “optimistic” about the future of humanity in dealing with the coronavirus.

“I don’t like that word, because optimism sounds like makeup to me,” Francis replied. “I have hope in humanity, in men and women, I have hope in nations. I’m very hopeful. People who are going to draw lessons from this crisis to rethink their lives.”

“We are going to come out of this better… fewer, of course. Many are left along the way and it’s hard. But I have faith: we will come through this better.”

Since his election in 2013, Pope Francis has insisted on humanity’s responsibility to care for nature, calling for an integral ecology that cares for human beings as well as the rest of creation.

A true ecological approach “always becomes a social approach,” the pope wrote in his 2015 encyclical letter Laudato Si. “It must integrate questions of justice in debates on the environment, so as to hear both the cry of the earth and the cry of the poor.”

Francis has also tended to personalize nature, suggesting that it “cries out” when it is mistreated.

Situations such as a loss of biodiversity and economic inequality “have caused sister earth, along with all the abandoned of our world, to cry out, pleading that we take another course,” he wrote. “Never have we so hurt and mistreated our common home as we have in the last two hundred years.”

“Neglecting to monitor the harm done to nature and the environmental impact of our decisions is only the most striking sign of a disregard for the message contained in the structures of nature itself,” he said. “When we fail to acknowledge as part of reality the worth of a poor person, a human embryo, a person with disabilities – to offer just a few examples – it becomes difficult to hear the cry of nature itself; everything is connected.” READ MORE