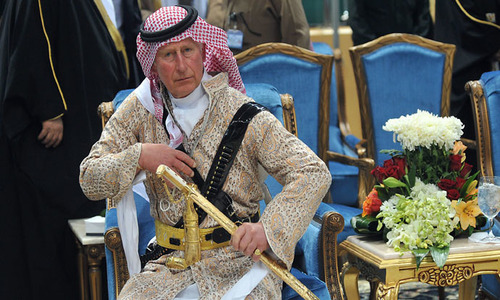 (ROYAL CENTRAL) The Prince of Wales continued his official visit to the Occupied Palestine Territories on Friday, undertaking engagements in Bethlehem on his first visit to the country.

Prince Charles’s day began with a walk through Bethlehem with Muslim and Christian leaders before a visit to the Mosque of Omar, where he learned about its history and signed the visitors’ book – signing his name in both English and Arabic.

According to Clarence House, the Mosque of Omar was built to “commemorate the visit to Bethlehem of Omar Ibn Al-Khattab, the second Caliph (successor) to the Prophet Muhammed.” It is also the only mosque in Bethlehem.

Prince Charles then attended an Ecumenical Service at the Church of the Nativity and met with senior Greek, Franciscan and Armenian Orthodox clerics. He viewed the church to see Byzantine and Crusader-era mosaics before heading to the Greek Orthodox Chapel of Saint George for the service.

After the church service, Prince Charles attended a reception at the Casa Nova, a Franciscan pilgrim house built for visitors to the Church of the Nativity. At the reception, Prince Charles met with Palestinian Christians, people who work in health and education, and Palestinian refugees before delivering a speech.

Prince Charles told the guests, “I must say for most of my life – and as someone brought up on the biblical stories of the Holy Land, to be with you here, in Bethlehem, means more to me than you can ever know! Therefore, to receive President Abbas’s kind invitation to make what is my first official visit here was greatly appreciated.”

He continued, “It is, if I may say so, humbling and profoundly moving to have taken my place in the long line of pilgrims who have journeyed to this special place of such great significance. (READ MORE)