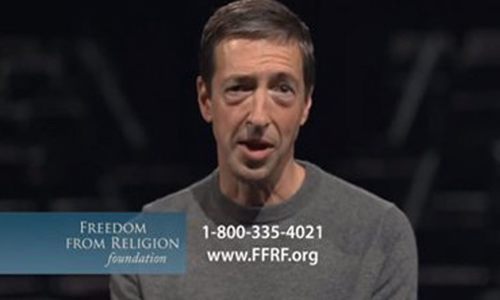 (DECIDER) It’s not everyday that a presidential debate features an advertisement from a “lifelong atheist not afraid of burning in hell,” but then again, these aren’t normal times. On Sunday night, CNN aired a commercial from Ron Reagan and the Freedom From Religion Foundation, a nonprofit aimed at maintaining a separation between church and state. Reagan’s ad confounded Democratic debate viewers, but that didn’t stop them from making jokes about the “absolute legend.” As BuzzFeed’s Kristin Chirico wrote, “Ron Reagan telling me he’s unafraid to burn in hell is generally what I see on TV *after* the edibles hit.”

On Sunday night, the Freedom From Religion Foundation, a “501(c)(3) nonprophet nonprofit,” spent god only knows (a particularly apt phrase, in this case) how much money on a national advertisement that aired during CNN’s Bernie Sanders-Joe Biden debate. The commercial, which was originally released in 2014, stars Ron Reagan, the 61-year-old son of President Ronald Reagan, stumping for the FFRF.

“Hi, I’m Ron Reagan, an unabashed atheist. And I’m alarmed by the intrusions of religion into our secular government,” he says, as the organization’s phone number and website appear below his chin. “That’s why I’m asking you to support the Freedom From Religion Foundation, the nation’s largest and most effective association of atheists and agnostics working to keep state and church separate, just like our Founding Fathers intended.” READ MORE