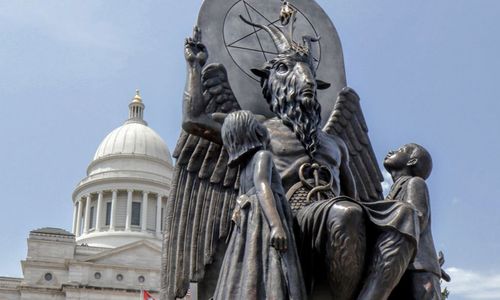 The title may seem strong and repelling to some, but it still bears the truth of what is happening in America. Can it be based on Scripture? And the answer is “Yes!”

The last article was on the consequences of God abandoning America. When this happens, it is because the people have turned away from the Lord. Instead of glorifying God and worshiping Him, “they became futile in their thoughts, and their foolish hearts were darkened” (Romans 1:21). “Foolish hearts” reject and dishonor God. They do not become enlightened as many sophisticated unbelievers claim. Instead, they progress further into spiritual “darkness” and become further enslaved to their own sin and foolishness. Unless, they turn to God in repentance, they will go deeper into this enslavement until they die and eventually enter into an eternal hell (Rev. 20:11-15).

Yet, they are not left alone in this foolish progression and enslavement. There is no neutrality. Without God, Satan takes control who is the “god of this age” (2 Cor. 4:4). Because they reject the Lord and the truth of the Gospel, Satan “blinds” them. Without being “born again” and becoming enlightened to the truths of God, they remain in the “power of darkness” (Col. 1:13). This will eventually lead them to a horrific eternity.

Therefore, what do we see happing in America today as well as the whole world? It is simply leaders in all areas of life who live in this “power of darkness” and make decisions accordingly. .These decisions, many times, goes against what believers follow regarding God’s Word and their walk with Christ. Unless they obey, pending persecution will take place. This may be coming to America as our leaders take this country further into darkness that goes against Godliness and any sense of decency.

For instance, take the political realm. Many of us are taken back by the lying and the hypocrisy that is constantly occurring. Several politicians lie without any sense of accountability. Every time I hear the lying, I think of what the Bible says that “all liars shall have their part in the like which burns with fire and brimstone, which is the second death” (Rev. 21:8). Also, “a lying tongue” is an “abomination” to the LORD (Prov. 6:17).

Another area is education. Many public schools and universities have totally changed from the time I attended. Now days there are schools that are teaching young children about sex education and gender identity. God said that there are only two genders (Gen. 1:27). Therefore, there are no other. A man who wants to be a woman is still a man. It cannot be changed! But it merely shows the Satanic “darkness” of human thinking. There are universities teaching a hatred for conservatives and America.

How about the medical field? There’s money involved. The Bible says that “money is a root of all kinds of evil” (1 Tim. 6:10). If we think we are being told everything about this pandemic medically, we are fooled. Is it bringing in money and filling pockets?

For us who know the Lord Jesus as our Savior and Lord, we still know that He is sovereign and He is going to bring it all together for His glory. We keep looking up!