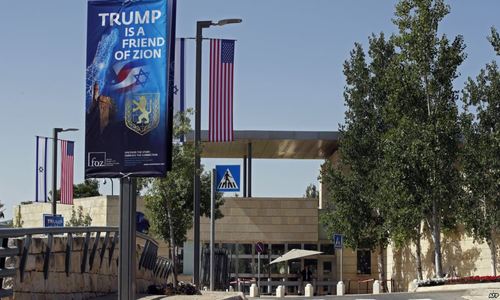 An historical but prophetic event took place a few weeks ago when President Trump made Jerusalem Israel’s capital. But, another event has just taken place on May 14, 2018 when the United States Embassy was moved to Jerusalem.

Yet, the violent protests on Gaza’s side near Israel’s border are by primarily the descendants of Ishmael, Abraham’s son through Hagar (Genesis 16:1-4, 15-16). However, some of the modern day Palestinians are descended from Lot’s two daughters (Genesis 19:30-38) and Esau, Jacob’s brother. There is, therefore, an interworking blood connection between them because of their relationship to Abraham. If anyone wonders where Lot fits in, he is Abraham’s nephew (Genesis 14:12).

Nevertheless, an important fact to remember that was stated in a previous article is that Jerusalem has been Israel’s capital in God’s eyes for over 3,000 years since the reign of King David (1 Chronicles 11:5-9). Amidst its struggles and being conquered as the Old Testament describes and history itself reveals after the time of Christ, Jerusalem has remained as the collective identity of the Jewish people for centuries. It has remained as the center point for their spiritual and political aspirations even when Israel lost its independence.

In fact, the Old Testament is filled with the mention of the Holy City: Jerusalem occurs 660 times and its synonym Zion occurs 158 times. Zion became a symbol for Jerusalem during the reign of David (2 Samuel 5:7). Mount Zion is the hill in ancient Jerusalem where King David’s palace once stood.

Nevertheless, during the glorious Kingdom reign of King Jesus for 1000 years after His Second Coming (Revelation 20:1-6; Isaiah 65:17-23; Luke 1:31-33), He will rule from Jerusalem. Psalm 2 speaks of the Lord’s future Coronation as the Father says, “Yet I have set My King [King Jesus] On My holy hill of Zion” (v. 6). As the Lord Jesus reigns, the Psalm speaks strongly, “Kiss the Son, lest He be angry, And you perish in the way, When His wrath is kindled but a little. Blessed are those who put their trust in Him” (v. 13). It will be a time when all Israel will finally recognize Jesus as their Messiah (Zechariah 12:10; Romans 11:26-27).

The present conflict by the Arabs at the border between Gaza and Israel has to do with how the Arabs look at Israel and Jerusalem. The Jewish people believe Israel is the land of the Jewish people while the Arabs see Palestine as that of the Arabs. Even before the State of Israel was established in 1948, Jerusalem seemed like a magnet that pulled the Jewish people back to their ancestral homeland. Now, they have been given a right to immigrate to Israel and immediately become citizens if they so choose. This is for the Arabs unthinkable and must stop. Moreover, with the present relocation of the United States embassy to Jerusalem is beyond their containment.