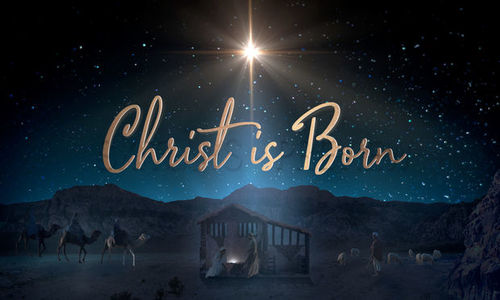 As we celebrate Christ’s birth, it’s always a time to reflect back, to see again how involved the loving biblical God was in the night Christ was born.

Mary and Joseph were in Bethlehem, the house of bread, where Jesus, the Bread of Life, the true Shepherd of the sheep, was born – and laid in a manger – a feeding trough. They arrived in Bethlehem from Nazareth, through God moving Caesar Augustus to make a decree that all should return to the city of their ancestors for the Roman census, in order to be registered for taxation, fulfilling Micah 5:2.

An angel came from heaven to announce this wonderful life-changing news that Jesus had been born in Bethlehem. But the announcement wasn’t made to the religious elite, the rich and famous.

Some shepherds, those despised in their day, watching their flocks by night outside Bethlehem, were terrified when this angel stood before them and God’s glory shown around them. I’m sure we would have been too if we were in their sandals.

The angel spoke these incredible words, “Do not be afraid, for behold, I bring you good news of great joy which will be for all the people; for today in the city of David there has been born for you a Savior, who is Christ the Lord. This will be a sign for you; you will find a baby wrapped in cloths and lying in a manger.” Perhaps the cloths were a picture of how He would be buried in the tomb later, and then through His bodily resurrection be the Savior of the world.

Suddenly the heavens were filled with angels saying, “Glory to God in the highest, and on earth peace among men with whom He is please.”

When the angels left, the shepherds hurried to Bethlehem and found Mary and Joseph and the baby lying in a manger. Evidently, they told Joseph and Mary what had happened. Perhaps others as well, for they wondered at what the shepherds had told them. Mary treasured these things in her heart. The shepherds returned to their flocks glorifying and praising God for what they had heard and seen.

What a night it was! Like any other night for the shepherds. But not this night. It was a night of miracles! A night orchestrated by the loving sovereign biblical God. A night that would change time and eternity. The heavenly Father’s indescribable gift to humanity, fulfilling the prophet’s words, announced by heavenly angels to shepherds despised in the society, with the glory of God filling the night sky, and the shepherds hurrying to Bethlehem to see their Shepherd, perhaps, the first ones, from the outside, to see the Christ-child. I like to believe their lives were changed for eternity, for they shared this good news, actually the life-changing gospel.

Sovereignty, grace, humility, acceptance, faith, salvation, and glory, all because the biblical God loved each of us so much that He sent His one and only Son into the world to be our Savior through faith. Have you trusted Him as your personal Savior? (cf. John 3:16).

If you know the Savior personally, take time individually and with your family to reflect on that miraculous night, and give Him praise. For because of that miraculous night, through faith in Christ, the miracle of new birth has happened in you – you are born from above possessing Christ’s very person spiritually (Colossians 1:27). It’s all because of the Grand Miracle – the Incarnation!