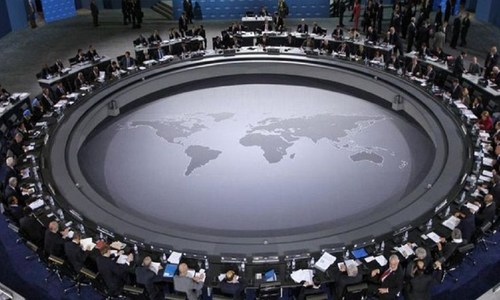 I doubt anyone can deny that there is a big push for globalism today in American politics. This is one reason why the globalists and liberals are still upset over the election of a non-globalist as the President of the United States. It really has nothing to do so much with the one who lost. Instead, anything or anyone that is opposed to globalism is the culprit.

We see this every day in the news, in politics, from the rebellious voices of Hollywood, and other medium outlets. Even other former globalists-presidents, from both political parties, are speaking in disgust and doing everything they can to oppose any decisions made from the White House. The scope of the opposition agenda is very evident and mind boggling and nauseating.

What is the underlying source of this resistance and hostility? It is one that is demonic because non-globalism goes against what Satan is seeking to bring about in a one world government with his dictator having universal control.

The present president is not perfect. He has made mistakes! Yet, there should be no denial among born again believers, who believe in the sovereignty of God, that God has put him in his position. God told King Nebuchadnezzar that he would humble him “until you know that the Most High rules in the kingdom of men, and gives it to whomever he chooses” (Daniel 4:32). To deny this is to reject what God has said! That is serious!

Even though the present president is a non-globalist, this will not prevent what the Word of God has prophesied regarding future events. The liberals and proponents of globalism will eventually see their desires brought to fulfillment in Satan’s world ruler. Whether this takes place in our lifetime, God knows! But, it will happen in His ordained timing. Satan’s man, the Antichrist, will emerge (Dan. 7:20-26; Rev. 13).

He will be evil to the core for he will be empowered by Satan (Rev. 13:4-7). As he is revealed, unsaved humanity will worship Satan and him (Rev. 13:4). He will be in control of a one world government for Satan will give “him his power, his throne, and great authority” (v. 2). His mouth will be “like the mouth of a lion” (v. 2). A lion excels that of any other beast. Therefore, the voice of the Antichrist will command attention.

If one can imagine Satan ruling the world with total freedom as he desires, there are no words to describe adequately the evil that would prevail over the whole earth. Yet, this is going to occur as the Antichrist reigns as Satan’s energized man.

Still, there are going to be multitudes that are going to come to Christ during this time but experience the Antichrist’s wrath as he executes them (Rev. 7:9-17). Being there are so many, I am sure there will be liberals and globalists that will be part of this group. They have turned to the Lord Jesus Christ and repented!