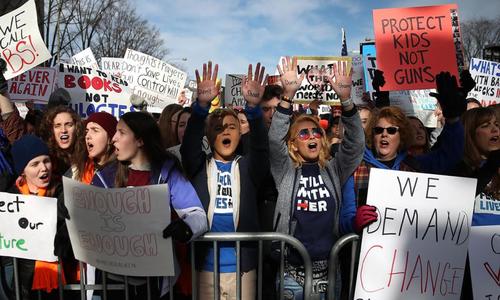 Twisted thinking includes the state of being twisted. It has to do with distorted thinking. It is making one’s way in a winding or devious manner to a destination or objective. This type of thinking was evident lately with the warped thinking that led the protesters against gun violence in schools. While the main initiator of it was being interviewed, his words were mixed with profanity and moral degradation.

However, there is no one who is against doing something about school violence. Yet, the thinking of many school officials and protesters are distorted. It is twisted!

How is it twisted? For example: Students and adults protest the murder of innocent students by a deranged person. This is very tragic! But on the other hand, the majority of them would not even protest against abortion clinics that are murdering unborn children every day. Who of these same students are fighting for these lives? None!

Seventeen innocent students lost their lives in a school shooting and a mass protest resulted from it. Even to the extent of wanting to take away the guns from innocent people that uses them for their own protection or for sport purposes. Still, millions of unborn innocent children are being slaughtered in their mothers’ wombs, and there are no mass protests. There should be but there are none at all. Neither are there any school walkouts in favor of outlawing abortions and the suffering of the unborn that occurs. Many of these same protestors are pro-abortion. This is twisted thinking!

There is another area and it has to do with violent video games and action movies in theaters, television, or other means. The same students who protest the murder of fellow students have no problem with participating in video games that specialize in killing other people. They partake with joy whether with friends or family members. What about outlawing this type of entertainment? Surely, it is a culprit for promoting violence. However, if this happened, many of these same students would rise up in protest. This is twisted thinking! What about action movies that kill people, even by the dozens. Where are the protests? There are none! Once again, this is twisted thinking!

How about the killing of police officers who are merely doing their duty to protect human lives? Or, police officers just sitting in their patrol cars and are outright slaughtered? Many of them leave behind grieving families including young children. Where are the student protests for this type of tragedy of innocent police officers whose only desire is to help and protect others? Once again, there are none! This is, also, twisted thinking!

The Bible says that “the heart is deceitful above all things and desperately wicked; Who can know it” (Jeremiah 17:9)? There is no medical cure for the human heart for it is “desperately wicked.” Jeremiah asks, “Who can know it?” The answer is that God does, and He is the only One that can change it through Christ (Ezekiel 36:26-27; John 3:3). Then it is through the Scriptures that the Holy Spirit gives direction in God’s will and how to live (Psalm 1:1-3; Psalm 119). Without this heart change and guidance from God’s Word, unsaved adults and students will continue in their twisted thinking!