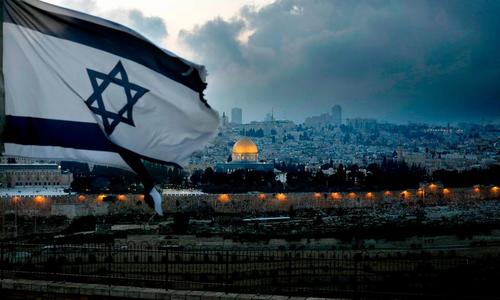 Israel’s prominence in the world is not by accident. As a magnet draws fragments of metal, so Israel has drawn the nations of the world. Nations and people groups either love her or hate her and desire her complete destruction. Iran for one threatens to destroy her believing it can do so in just a short period of days. The United Nations wants to divide her making a Palestinian State.

But why does Israel and Jerusalem attract so much attention from world leaders? Why is there a lashing out at President Trump for His support of Israel? We need to realize that this goes beyond any human causes. Instead, it is supernatural because the nation of Israel has a strategic role in Bible prophecy and will be involved in end-time events. It is very difficult to study prophecy and try to avoid Israel. It is at the center of God’s prophetic plan for the future. It will be the place where the nations of the world will gather for an end-time battle called “Armageddon” (Megiddo) (Rev. 16:16). Yet, it will play a major role when King Jesus returns in judgment in His Second Coming to judge and to set up His throne in His Kingdom reign for 1000 years (Rev. 20:1-6).

Nevertheless, there are two reasons why Israel is such a detested nation. To understand this, a person has to biblically see why this revulsion is happening.

1. The LORD loves Israel. One of the main passages to understand this love is Deuteronomy 7:7-8. It says that “The LORD did not set His love on you nor choose you because you were more in number than any other people, for you were the least of all peoples; but because the LORD loves you, and because He would keep the oath which He swore to your fathers, the LORD has brought you out with a mighty hand, and redeemed you from the house of bondage, from the hand of Pharaoh king of Egypt.”

2. Satan despises Jerusalem. He hates Israel. All through Old Testament history we read of Satan’s attacks on Israel and Jerusalem seeking to destroy them. For instance, in Genesis 22:14-18 it is clearly given, prophesied that a Redeemer would come to Mount Moriah and would come from Abraham’s seed. Moriah is the mountain range where Jerusalem is situated (2 Chron. 3:1) but also where Calvary stood.

Therefore, ever since, it has been Satan’s goal to attack the descendants of Abraham through Isaac. Satan knows that it will be from Jerusalem that King Jesus will reign and he is trying to do everything he can to stop it! His demons will even gather world forces against Christ at His Second Coming in “the battle of that great day of God Almighty” (Rev. 16:14). But, his forces will experience a massive defeat (Rev. 19:17-21). The Antichrist and false prophet will be cast into “the lake of fire” (v. 20). Every unsaved person from the beginning of time, with Satan, will eventually experience the same hell (Rev. 20:7-15). Nevertheless, Satan’s battle with Israel and the coming Messiah goes all the way back to Genesis 3:15 and is clearly described in Revelation 12:1-17.