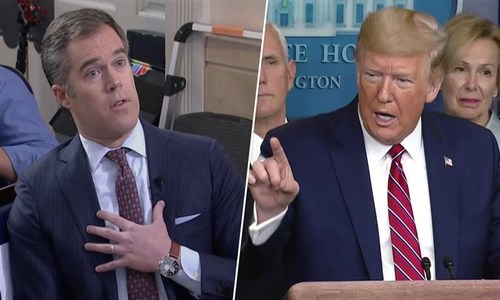 (REAL CLEAR POLITICS) President Trump, a man famous for his belief in the power of positive thinking, shut down a question from NBC White House reporter Peter Alexander on Friday during the daily coronavirus task force press conference.

Alexander listed the number of infected and dead, implied that hospital space would soon run out, and asked: “What do you say to Americans watching you right now who are scared” of the coronavirus outbreak?

“The American people are looking for answers and hope, and you’re doing sensationalism, the same with NBC and Comcast — I don’t call it Comcast, I call it Con-cast — for whom you work.”

“Let me tell you something,” the president continued. “That’s really bad reporting. You should get back to reporting instead of sensationalism… You ought to be ashamed of yourself.” READ MORE