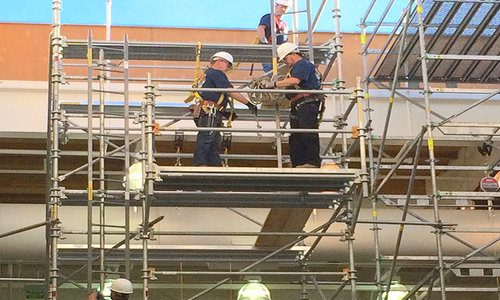 These words from the pen of James Russell Lowell came to mind as I have watched the different events unfold in the USA over the past several months.

For it appears that somewhere in the midst of all the happenings, truth is on the scaffold and wrong is on the throne. Shameful, lethal, and law-breaking uprisings took place at the US Capitol. Big cities ransacked. Control of speech by big tech giants. Some are attempting to cancel culture. A new administration is intent on becoming the “moral compass” for the nation. In the midst of such activity, we are sadly reminded that on January 22, 1973 was the day the U.S. Supreme Court legalized abortion-on-demand in all 50 states. Since that date, some 62,000,000 lives have been aborted or killed. Add to these developments the continued challenge of the COVID pandemic.

So, what’s the bottom line here? It’s all about life, and the value of life. Are we the product of some theory that makes us just an extension of the animal world? OR are we created by the biblical God physically either male or female, and with a non-material part created in the image of God, with a mind, emotion and will? (Genesis 1:26-28).

Taking the first view, a person really becomes the final arbiter of how he conducts his life, and how he desires to treat life. Sure, one may operate within certain laws in the society, without even considering the origin of such laws. With man being the final authority, if he wants to change what God has created, he does that through his own authority, even using legal means, if needed, to make that happen. When he is in power, in certain circumstances, he can do what he wants to control the liberty that people have. All is done for the good of those in power and for all who agree with the agenda at hand. No hope of any kind is offered to an individual.

On the other side of the coin, man is not the final arbiter of how he conducts his life and how he may want to treat life. Why? There is truth, truth that is based upon eternal absolutes, which provide guidance and direction for one’s life so the person can treat each person with respect and honor, as an individual made in the image of God, while living in His freedom to experience a life that has eternal fulfillment here with the hope of some day living in eternity with his God.

And the one who can make this truth a reality in one’s life, is Jesus Christ, who is the Way, the Truth, and the Life, through providing mankind redemption through His empty cross and open tomb. Thusly, the believer in Christ upholds the value of life, loves one’s neighbor as one’s self, and follows the biblical directions that promote peace and godliness, while praying for the government officials (I Timothy 2:1-2), and believing that government authority is given for one’s protection (Romans 13:1-7) not to control how one thinks and to keep one from expressing his thoughts and beliefs in a proper manner.

Obviously, there is a real battle going on for truth in the USA, actually throughout the world. It’s man’s reason against God’s revelation in the written Word, the Bible, and the living Word, Jesus Christ. It’s a spiritual battle. It appears that man’s reason is winning – truth is on the scaffold as man amplifies his authority to control. The Scripture calls it the antichrist spirit. However, Christ has won the battle for truth on His scaffold, was buried, and conquered the grave bodily. Today, as the Truth, He gives His followers courage and strength to live out His truth in love, with the promise of His anytime return to make things right. Until then, as James Russell Lowell penned, behind the dim unknown, standeth God within the shadow, keeping watch above His own.