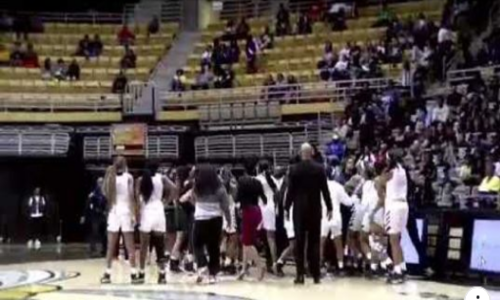 (CBS) After Texas Southern women’s basketball’s 81-54 win over Alabama State on Monday night at the Dunn-Oliver Acadome in Montgomery, Alabama, multiple players ended up in a fight that turned into a full on brawl on the court. The cause of the fight is not yet known.

Judging off the multiple videos on Twitter of the brawl, it appears many players and coaches from both sides attempted to break it up. However, it became a very serious situation before eventually calming down.

And here is a closer look that clearly shows the punches being thrown and the gravity of the fight. The players’ actions escalated so much so that objects were being knocked over, including a courtside table where reporters were sitting.

Alabama State University President Quinton T. Ross, Jr. released a statement on the incident, saying the team’s actions are not in line with the school’s image.

“I am extremely disappointed by the behavior of our women athletes at the end of their game against Texas Southern University. Alabama State University has a zero-tolerance policy for this type of behavior,” Ross said.

The situation is still being investigated, according to the university president as well as Alabama State University Director of Intercollegiate Athletics Jennifer Lynne Williams. READ MORE