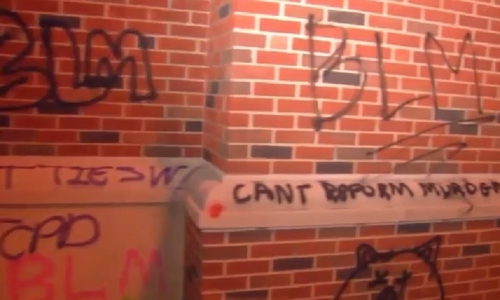 (CAMPUS REFORM) Black Lives Matter protesters covered several University of Iowa buildings with spray-painted slogans in the wake of George Floyd’s death. The University of Iowa spent $1 million to repair the buildings, but will curate pictures of the graffiti to uplift “the voices of marginalized people.”

According to the university’s Office of Strategic Communication, protesters painted phrases like “BLM” and “F12” on roughly two dozen buildings, as well as sidewalks, artwork, retaining walls, plaques, and benches. The university announced the $1 million cleanup project after Iowa Freedom Rider protesters promised to stop using spray paint on the campus’s property, according to the Iowa City Press-Citizen.

Meanwhile, the university expects a $100 million revenue loss and a budget deficit as large as $75 million due to the cancellation of fall sports.

Among the damaged buildings is the Old Capitol, which was built between 1839 and 1842 to serve as Iowa’s first state capitol. Today, it hosts a museum and serves as the University of Iowa’s centerpiece. The Office of Strategic Communication’s press release shows an image of the historic building covered on all sides with graffiti.