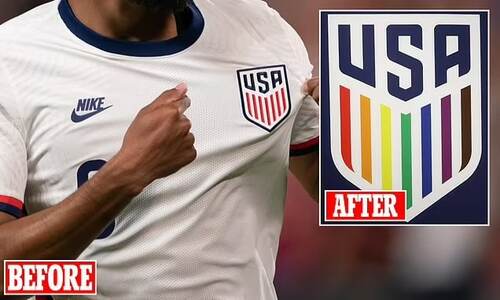 The new logo incorporates rainbow colors instead of the usual red stripes. It will be worn at the team base, not on the field.

“USA Soccer should not promote beliefs that many oppose,” states McConkey. “They assume every fan, coach, or athlete is on the same page. Instead, they need to focus on winning, not trying to please a small percentage of the population.”

4 WINDS USA (4 Winds Christian Athletics) is a worldwide sports ministry (4WindsUSA.com). Starting in world-class track and field ministries in 1981, Steve and Liz McConkey have worked through ten Olympics. From 1982 through 1992, Steve was a USA National Track and Field Club Coach with athletes ranking ninety-two times. In 2013, the ministry expanded to all sports. Steve graduated with honors from Western Kentucky University (Master of Public Health), Minnesota State University (BS-Community Health), and Webster High School (WI). They have lived in Bowling Green (Kentucky), Eugene (Oregon), Dallas-Fort Worth (Texas), Minneapolis-St. Paul (Minnesota), and Madison (Wisconsin). In recent years, the ministry has had many worldwide radio interviews and global articles, plus TV interviews.