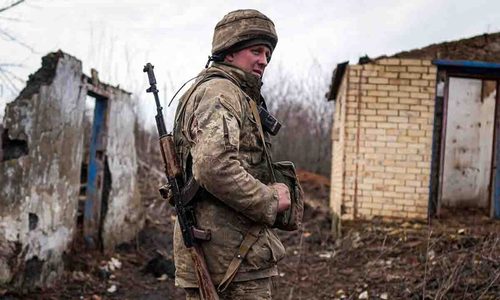 My heart is heavy as I write this article. I’m sure your heart is heavy as well as you read this article. Why? We are overwhelmed by the evil atrocities committed in Ukraine by Putin and his armed forces. At the same time, I’m sure we are inspired by the stellar courage and resistance of the Ukrainian people and their armed forces to defend their freedom. I know we are all praying that Putin and his forces will somehow be defeated, and that the people of Ukraine will receive the needed supplies and help for their physical needs, as well as military ammunition. Perhaps you have already helped in some way.

The world was shocked that in this 21st century a man would be moved to carry out an invasion of a free independent country and then commit such barbaric acts to attempt to take over that country, causing millions to flee their beloved county. Putin’s actions, however, committing war crimes, should cause all of us to realize how awful evil is when on full display. In fact, as has been said, the geo-political order has been reshaped and it’s likely only the beginning of a seismic disruption.

The words of the Lord come to mind in this indescribable situation, “The thief comes only to steal and kill and destroy; I came that they may have life and have it abundantly (or in surplus)” (John 10:10).

Well, you might say, what do those words have to do with Putin’s evil invasion of Ukraine? Of course, some would even deny the validity of these words.

These words of the Lord are relevant, for we are being told that there is a spiritual battle going on in our world today. It’s a battle between the forces of evil and the forces of good. The master mind behind the forces of evil is the devil, himself, and his demons (Ephesians 6:12). The One over the forces of good is the Lord Jesus Christ. The devil is a thief stealing, killing, and destroying life. He is the source of death. Christ, on the other hand, brings life, physical life, as our Creator, and eternal life through His death, burial, and bodily resurrection for all who place their faith in Him (John 3:16). He is the Source of Life.

From a biblical perspective, then, in carrying out the atrocities of the evil one, Putin is being influenced by the evil one, who steals, kills, and destroys. Such action should be a wake-up call to the world where freedom is cherished and upheld by different nations. For China is lurking in the background eyeing Taiwan possibly to take away its freedom. Iran continues to exercise its military muscle to disrupt people’s freedom.

Other countries could be named. But those countries who have a dictatorial government don’t want their people to have the freedom to enjoy life, liberty, and the pursuit of happiness. They desire to control people so their ideology is maintained, which is really influenced by the evil one, who doesn’t want people to enjoy the freedom that God has given them.

The ultimate of that control is when an evil man like Putin, influenced by the evil one, invades a nation to take away the people’s God-given freedom. Even though the USA is still the bastion of freedom, there is, from my perspective, a note of warning, for the present administration likes control, and pushes its agenda with its ideology including legislating morality and taking away the freedom to develop its own energy resources.

Regardless of one’s beliefs, the spiritual battle in our world rages on – the forces of death verses the forces of life. One day, in God’s timing, Christ will come and put down all evil and establish His 1000 year reign of peace on earth, and eventually create a new heaven and earth where peace and righteousness prevail forever. In the meantime, I trust through faith in Christ that you are part of His eternal kingdom. He is your LIFE. May we continue to pray that His victory will be experienced by the Ukrainian people. As believers, may we live in the Lord’s power to resist the temptations of the evil one and serve our Lord enthusiastically for His glory!