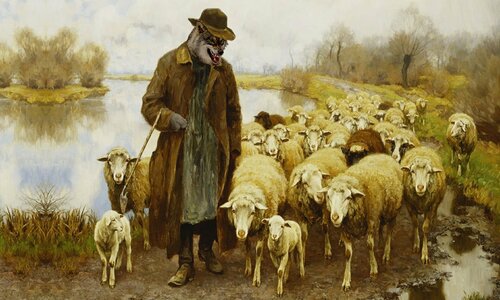 What is tragic today, as centuries before, are false teachers who claim to be believers in Christ but make false statements that are directly in opposition to God’s Word. The difference between those of another time and today is that those presently have huge followers on television, the internet, and buyers of their books. In fact, some of these books are best sellers. This alone shows the illiteracy of people, including many believers, regarding the truths of God’s Word. If they were actually grounded in these truths, this deception would never take place. The false teachers would not have an audience.

These deceptive preachers and teachers bend with the culture and twist the Scriptures to make it sound true to their false beliefs. When you watch one or two of them on television, you see many in the audience taking notes eagerly listening to learn from their deceptive teaching. Because of this, the true servants of the Lord, who know the Word of God and are seeking to teach it faithfully, are grieved in the heart for the many who are led astray. The falsehood in twisting the Scriptures keeps them from knowing the truths of God.

The apostle Peter describes false teachers in 2 Peter 2:13-22. He has harsh words for them as he addresses their sinfulness and the menace that they are to weak and new believers. And these type-of-pastors are also spiritually dangerous in their local ministries whether in small or mega churches.

Peter says in verse 14 that these false teachers “having eyes full of adultery and that cannot cease from sin.” In other words, they are moral frauds in their private lives because they have “eyes full of adultery.” They can not even view a woman without looking at her as an object of adultery. There are those that have divorced their own wives for another of their lustful thoughts. The apostle also says that they “beguile unstable souls.” In other words, they prey upon the spiritually weak sheep from the flock convincing them of their doctrinal lies and debauched behavior. These false preachers/teachers are familiar with the gospel but have turned their backs on it and have become worse than ordinary pagans.

In addition, they are, in very strong words, “wells without water, clouds carried by the tempest” (v. 17). They are deceptive and unable to achieve what they promise. Their words are often prideful and boastful. “While they promise them liberty, they themselves are slaves of corruption; for by whom a person is overcome, by him also he is brought into bondage” (v. 19). In other words, they offer “freedom” when they themselves are “slaves of [depravity].”

So, in our modern culture, we can be certain that we will encounter false teachers and preachers that masquerade as Christ’s servants (2 Cor. 11:13-15). Therefore, we who follow the Lord Jesus, it is important to check every teaching with God’s Word to discern who is circulating lies and who is telling the truth.