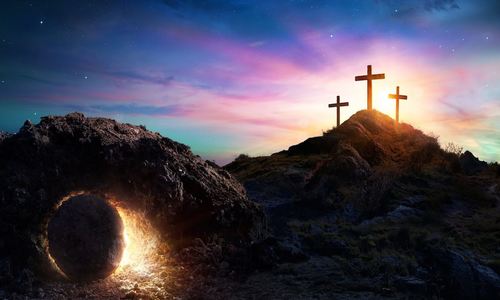 In the so-called Christian world, Holy Week, is a familiar term. It’s that week from Palm Sunday through Easter Sunday – this year, Sunday, March 28 to Sunday, April 4, 2021. Actually, the term was first used in in the 4th century by St. Athanasius, bishop of Alexandria, and St. Epiphanius of Consantia.

What catches my attention in the term, Holy Week, is the word, Holy. It means to be set apart as being pure, without sin. Now, as we observe the events of Holy Week, it becomes clear that the only Person who was holy in all the characters that participated was Jesus Christ.

That’s why the Apostle Peter, who betrayed His Lord, and was forgiven and restored by Him, wrote in His letter, now understanding who Christ was, “who committed no sin, nor was any deceit found in His mouth; and while being reviled in return; while suffering, He uttered no threats, but kept entrusting Himself to Him who judges rightly” (I Peter 2:22-23).

What a phenomenal description of Jesus Christ! He was holy, without sin – the God-man. Since He was sinless, holy, He could do for us what we can’t do for ourselves, being unholy. That’s why Peter continued his writing, “and He Himself bore our sins in His body on the cross, so that we might die to sin and live to righteousness . . . “ (I Peter 2:24).

There is the purpose of the holy Jesus, to become our sin bearer, to become our substitute through His death, paying our penalty in His death for our breaking His laws, and rising from the dead bodily, to tell us that His forgiveness and eternal life are available to anyone who will accept Him as personal Savior.

Without this historical and spiritual reality, Holy Week is just a Week in form with no substance for anyone. The sad fact is that some deny this reality, while others just pass by. Then, others celebrate Holy Week, but Christ didn’t really rise from the dead bodily. There’s only the spirit of resurrection bringing some kind of spring freshness. Some even believe in Jesus, but their lives give no indication they are living a holy life for their Lord.

Only encountering the love of the risen living Christ through faith, will the believer know he is forgiven of his sins regardless of what he has committed, such as evil thoughts, immorality, coveting and wickedness, deceit, sensuality, envy, slander, and pride. Then the believer will also know he is set apart to God as holy, so he can live a holy life for Him. He will still sin at times, but confessing his sin to the Lord, he is forgiven, and continues to enjoy fellowship with Him (I John 1:9).

Forgiven by the Lord, the believer begins to understand what holy living is all about, as he realizes who he is – eternally valuable, made in the image of the biblical God. With Christ living in him spiritually, depending on His power, the believer begins to think like Christ, as he accepts all people as made in God’s image, either male or female, and as he realizes all human life is valuable from conception to the grave, while marriage is between a man and a woman. In his attitudes and actions, selfishness and arrogance begin to be replaced by selflessness and humility. The believer desires to serve others not to be served, encouraging others, while having a forgiving spirit, as he lives in the hope of the Lord’s anytime return.

Don’t miss what Holy Week is all about, the most significant week In history. Just think of the change that would be brought in our families, our communities, the USA, yes, the world, if more individuals, regardless of status, understood and experienced the holiness of God through faith in Jesus Christ. There would be a little more of heaven on earth! Isn’t that what we need today in all of our lives?