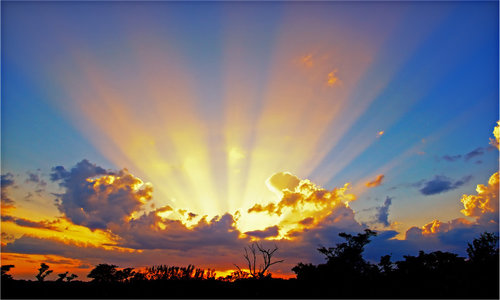 I was in conversation with some friends at a funeral luncheon recently, and the subject turned to what is happening in our world, particularly in the USA. As the conversation went along, it turned somewhat negative, as it was suggested that things are going to get worse and worse. It appeared that there wasn’t much good in the world. Is that true?

Well, consider this. The sun rises each day and shines on all people at different times regardless of who we are. All receive its benefits. At night we can see the moon, the innumerable stars, constellations, and bright planets – being reminded of the vastness of the universe. The rain falls on everyone regardless of where they are on their spiritual journey. When anyone plants in the soil, the seed will produce after its kind. Where we live, we enjoy the four seasons, and the trees are just beginning to turn. In addition, the human body is an amazing creation – able to heal itself when injured.

More could be mentioned, but if the sun doesn’t shine, the moon doesn’t function, the rain doesn’t fall, the soil doesn’t bring produce, and the body doesn’t heal from injury, we are in a desperate, lethal situation. We wouldn’t be here very long, if at all.

Such happenings, which are easy to take for granted, myself included, for we just expect them to take place, have been called common grace. They are the expression of good in the world which we all experience. The Psalmist recognized common grace when he penned, “The heavens are telling of the glory of God, and their expanse is declaring the work of His hands” (Psalm 19:1).

Of course, today those statements are not accepted in the public arena of ideas. To say that the biblical God created a world that operates with the precision that it does, and created humans, male and female, to live in that world to multiply and develop civilizations is only a good fiction story, if that. But could it be that we are having all the trouble in the USA with division, relationships breaking down, riots, murder, jealousy, immorality, government overreach, egotism, pride, and the whole woke movement, because we have forgotten, or have ignored our Creator?

Read Romans 1:25, which says that they exchanged the truth of God for the lie, and worshiped the creature rather than the Creator. You be the judge, but from my perspective, what is transpiring in the USA is because many of our leaders, our educators, those in high tech, and many of the population are worshipping the creature man rather than the Creator God – the biblical God. Such a life-style can only cause a culture to become more decadent.

However, in the midst of common grace there is another kind of grace. It’s called efficacious grace. It’s the kind of good that is not man-made, but rather comes from the biblical God. It’s called the gospel, the good news. In fact, in the conversation I referred to above, I commented that there is good news in the midst of all the bad news. It’s the good news that is found in the person of Jesus Christ, that changes a person from being self-centered to being other centered, causing one to love another person because of who he or she is, made the image of the biblical God.

The gospel gives the believer in Jesus a new understanding of what is right and wrong – what holy living in love is all about (I Cor. 13:4-8a). The Gospel brings new life with forgiveness and acceptance in one’s marriage, while providing an unchanging basis and eternal hope to live in the world with heaven’s eternal values rather than with man’s changing ideas which continue to bring negativity and sin, with the downward spiral in the USA, and the world. The gospel causes people to reach out to those in need. I was in church recently on Sunday morning that had gathered an immense amount of supplies for the Afgan refugees who have come into the area.

May you enjoy God’s goodness in His common and efficacious grace as you place your faith in the Lord and live for Him, while sharing His life-changing gospel with others who need His eternal touch!