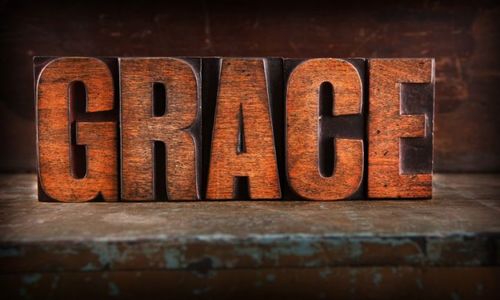 If we’re honest with ourselves, we all need grace. But what is grace?

It’s been illustrated this way. A Christian Education Teacher of Junior High boys was teaching his class about justice, mercy, and grace. After teaching on these subjects, the teacher asked his class how his students would describe these words.

Obviously, this young lad had understood something about grace. It’s unconditional, sacrificial, and forgiving. As I observe what is happening in the USA, and really around the world, this kind of grace seems to be hard to find.

One who thought he knew what grace was all about, discovered that the grace he was trying to muster up wasn’t genuine grace. I’m referring to Martin Luther. In fact, we have just come through a date when Luther’s action changed the course of church history, for on October 31, 1517, he posted 95 theses on the Castle Church door in Wittenberg, Germany in protest to the action of the organized church, which thought that paying money could bring one salvation, could bring God’s grace.

Reading and studying the book of Romans, particularly 1:17, Luther came to realize that the grace he thought he had he didn’t have, and furthermore that grace couldn’t be bought, and couldn’t provide him the biblical God’s forgiveness. Rather He needed to accept God’s grace which was greater than any kind of grace he could express or earn – for his grace was tainted with his sin and rebellion against God, while God’s grace was holy, eternally unconditional, sacrificial, and forgiving, as His grace was expressed to him through the death, burial, and bodily resurrection of Jesus Christ

Luther’s action, along with others, such as Wycliffe, Haus, Zwingli, Tyndale, and Calvin, brought about what is called the Great Protestant Reformation. God raised up these men to cause people to grasp anew what the biblical God’s grace was all about, which grace is still available today.

I don’t know about you, but this is the kind of grace I need in my life, not a man-made grace that’s here today and gone tomorrow. But grace that is eternal and can change me into a person whose selfishness, unforgiveness, not accepting people, and putting people down is replaced with selflessness, a forgiving spirit, accepting all people regardless of background, with the ability to build up a person and bring encouragement.

I’m glad I have accepted that kind of grace found only through faith in Jesus Christ, who is the epitome of grace – grace unconditional, sacrificial, and forgiving. That’s doesn’t mean that I’m perfect, but it does mean that I’m accepted in Christ, and when I don’t have that forgiving spirit, or I don’t display unconditional, sacrificial, and encouraging love, He will forgive me, for not being like Him, when I ask Him (I John 1:9), and then He will continue to use me as I trust in Him.

Yes, the biblical God’s grace is much, much, more than a crispy cream donut. Donuts are gone quickly, but His grace is forever. Have you experienced His forever grace through faith in Christ? (cf. Ephesians 2:8-10). Only as individuals experience God’s grace through faith in Christ, and live out His grace, will our nation become a nation of grace, which is desperately needed today!