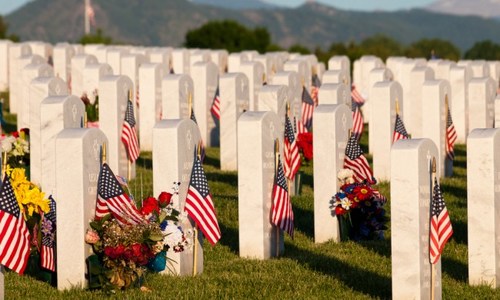 It’s a day set aside to honor the men and women of the U. S. military who have given the ultimate sacrifice of laying down their lives to preserve our freedoms in America.

Originally called Decoration Day, it originated three years following the Civil War on May 5, 1868, when Maj. Gen. John A. Logan established Decoration Day as a time for the nation to decorate the graves of the war dead with flowers on May 30. It is believed that date was chosen because flowers would be in bloom all over the country. After World War II, Decoration Day was called Memorial Day and became the official name by Federal Law in 1967. In 1968, the government moved Memorial Day to the last Monday in May making it an official holiday in 1971.

To remember those who have given the ultimate sacrifice for their country, normally different communities throughout the USA have parades and time to recognize these heroes. Due to the coronavirus pandemic this past year, Memorial Day parades were cancelled. Now with the distribution of the COVID-19 vaccines nationwide, parades are coming back this year to honor those who have given their lives for their country in the USA military.

However, I understand that three of those parades will be attracting some of the largest crowds this year. The National Memorial Day Parade in Washington, D.C., a three-hour event will start at 5 p.m. EST, according to the American Veterans Center. Participants will pass by the National Mall on Constitution Avenue and salute “America’s military and fallen heroes from the American Revolution through Afghanistan and Iraq,” according to the Parade’s online brochure.

In Chicago, its Memorial Day Parade will be live-streamed as a “commemoration” on Saturday, May 29, according to the city’s government website. Viewers can catch the event on the Chicago Department of Cultural Affairs and Special Events’ Facebook and Twitter accounts at 11 a.m. CST.

May this remembrance of our heroes also be a reminder to all of us that freedom is not free, for it comes with a cost. Why? There are those who would take away our freedoms and establish a dictatorial rule. Evil exists, and confronting that evil may cost lives to defeat that evil and maintain freedom.

This means the challenge before us is really spiritual. That’s why Christ, referring to Himself, said that if the Son makes you free, you will be free indeed (John 8:36). For the believer in Christ, He gives the believer the freedom to have true fulfillment and the right direction in his or her life, while having true eternal hope in Him beyond the grave. May that kind of freedom be yours through faith In Jesus Christ.

Certainly, we are grateful for all who have served and now serve in the U. S. military, but on Memorial Day we pause to give thanks for those who have died so that we might be free, grateful, as one Navy Seal commented, that our heroes were not “finger people,” pointing at others, passing blame, and sulking about problems, but rather “thumb people,” pointing to themselves, taking ownership, finding solutions – serving selflessly, an example for all of us to emulate.