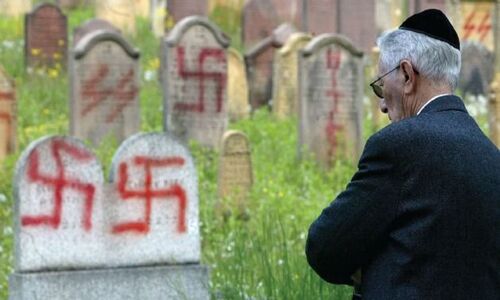 Three years before he died, Martin Luther wrote a 13-part booklet titled On the Jews and Their Lies whereby he vented his animosity against them. He wrote, “Next to the devil, a Christian has no more bitter and galling foe than a Jew.” Here was a leader in the Protestant Reformation; and yet, he had fierce anger toward the Jews. However, it was not always this way in his early years of ministry. But when they refused to turn to Christ and accept the gospel of justification by faith, he turned against them. To him, they were nothing but vindictive, serpents of the devil. Tragically, it influenced the German perception of the Jews justifying Hitler’s massacre of European Jewry.

Therefore, we may ask, “Where was his thoughts on Jesus, our Savior, being a Jew?” Without the Lord’s sacrificial death on the Cross, Luther himself would spend an eternity in hell along with those he taught who came into justification by faith alone through Christ alone. But without the Cross, everyone is condemned!

Surely, he understood that Paul never hated the Jews, his own people, who would not accept the gospel. Instead, the Apostle longed for them to come into saving faith. He wrote, “For I could wish that I myself were accursed from Christ for my brethren, my kinsmen according to the flesh” (Romans 9:3). He expressed himself in hyperbole that he was willing even to forfeit his own salvation if it could save his fellow Jews from God’s condemnation. Now, he knew his salvation cannot be taken from him. Instead, he is speaking emotionally from the heart and not theologically. But he had a deep love and desire that they could experience faith in the Lord Jesus. Therefore, he expressed it with love and not hate.

Tragically and sadly over the centuries, the Jews have suffered great distress. They have been tortured, their own property stolen from them, whole Jewish communities expelled, they have been murdered with no sense of justice, and many other atrocities. History tells all about it!

But even more disgraceful are denominations, churches and pastors pushing antisemitism. And it is growing. Replacement theology has played a big part that the church has replaced Israel. I attended a seminary that taught it and I believed it. This heresy was lifted after I graduated and began to study the Scriptures, both for personal study and sermon preparation, that my eyes were opened. None of the New Testament passages that are favorites of Replacement theologians have any actual statements that God has replaced Israel with the church. So, I despise this antibiblical theology that is leading many astray.

Yet, God knows what has been done to His chosen people Israel. He will bring future justice. The sin of the nations that have persecuted Israel will be judged (Joel 3:1-3). And Jews will live safely in their land (Ezek. 34:11-13, 15). All the promises given to Israel will take place during Christ’s Millennial Kingdom! God’s Word brings out truth clearly and distinctly. What He says happens!